Passive fire protection materials insulate structures from the effects of the high temperatures that may be generated in fire. They can be divided into two types, non-reactive, of which the most common types are boards and sprays, and reactive, of which thin film intumescent coatings are the most common example. Thin film intumescent coatings can be either on-site or off-site applied. 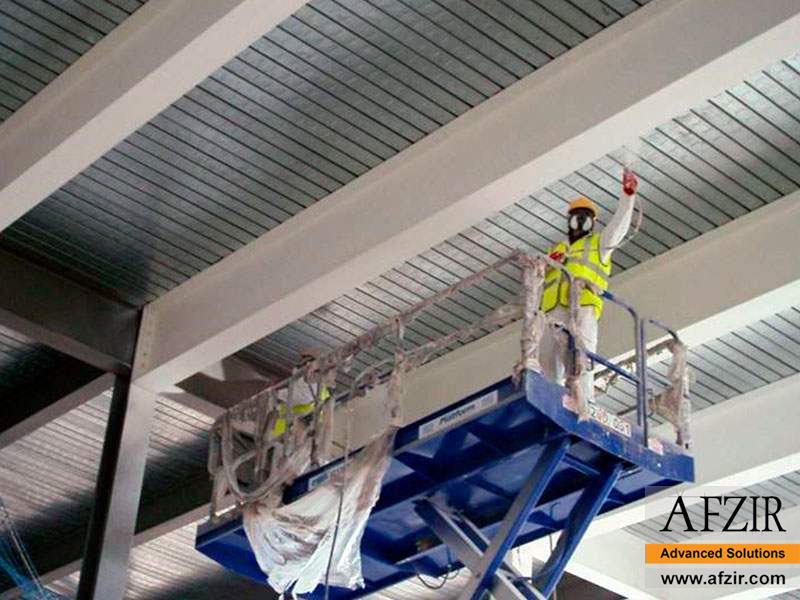 Intumescent coatings are paint like materials which are inert at low temperatures but which provide insulation as a result of a complex chemical reaction at temperatures typically of about 200-250°C. At these temperatures the properties of steel will not be affected. As a result of this reaction they swell and provide an expanded layer of low conductivity char.

The most common use for intumescent paint is to provide an aesthetically pleasing finish on exposed structural steel members.

Typical spray applied fireproofing provides a thick and spongy surface that requires a finished surround to hide and protect the steel member. Intumescent paint provides the same level of protection in a coating that looks like a thin layer of paint.

The paint product is applied to the steel in layers as needed to generate the thickness that corresponds to the level of protection mandated by the building code. A final layer of intumescent paint is mixed with pigments that provide the desired finish color for the steel.

Intumescent coatings can be divided into two broad families: thin film and thick film. Thin film materials are either solvent based or water based and are mainly used for building fires. Thick film intumescent coatings were originally developed for the off-shore and hydrocarbon industries but have been modified for use in buildings.

Thin film intumescent coating systems generally have three components, a primer, a basecoat (the part which reacts in the fire) and a sealer coat. The basecoat usually comprises the following ingredients:

They are mainly used in buildings where the fire resistance requirements are 30, 60 and 90 minutes. In recent years, a number of products have been developed which can provide 120 minutes fire resistance. They can be applied either on-site or off-site. In general, most on-site application is carried out using water based materials. However, where the structure to which the material is applied is not to have an end use in a dry, heated environment, solvent based materials are commonly used. Solvent based materials also tend to be able to cover a wider range of section factors than water based materials and can be used on-site to protect smaller sections requiring high thicknesses.

Both solvent based and water based coatings can be used to achieve attractive surface finishes. If a decorative or bespoke finish is required, this should be included in the specification. Thin film intumescents have the added advantages that they can easily cover complex shapes and post-protection service installation is relatively simple.

Typical expansion ratios are about 50:1, i.e. a 1mm thick coating will expand to about 50mm when affected by fire.

Thick film intumescent coatings are usually epoxy based and typically have a much higher dry film thickness than thin film alternatives. These materials are tough and durable and were originally developed for use with hydrocarbon fires, where the test heating regime is much more severe than that used for most industrial and commercial applications. A number of manufacturers have modified their materials for use in cellulosic fires. These modified materials are usually used in situations where the benefits of intumescent coatings in terms of appearance, weight and thickness are required but where circumstances are too severe, or maintenance too difficult, to allow the use of thin film materials. Typical recent examples have occurred in external steel in high rise buildings and exposed marine environments.

Intumescent products are made of a series of chemicals suspended in a binder. When the binder is exposed to heat it begins to soften, which allows the suspended chemicals to the heat. The chemicals begin to react, which releases vapors that create a foam. A carbonization occurs and the foam solidifies into a black insulating material that is often referred to as char.