Externally post-tensioned steel tendons have long been an attractive option for increasing the design loads or correcting strength and serviceability problems in bridge and building structures. More recently, alternative solutions have been developed and implemented that use straight post-tensioned carbon fiber reinforced polymer (CFRP) tendons, ideally enlisting their high-strength to failure, small relaxation, corrosion resistance, and light weight. In this paper, a novel CFRP system for external post-tensioning is presented. The solution consists of unbonded CFRP bars connected to dead- and live-end steel anchors by means of couplers that allow the bar to develop the full tensile strength. Intermediate deviators can be extended vertically to impart additional post-tensioning (PT) force and achieve a profiled bar configuration. The required uplift forces for deflection control of a flexural member are provided by modifying the number, position and extended height of the deviators, similarly to commercially available systems that use steel wire strands. 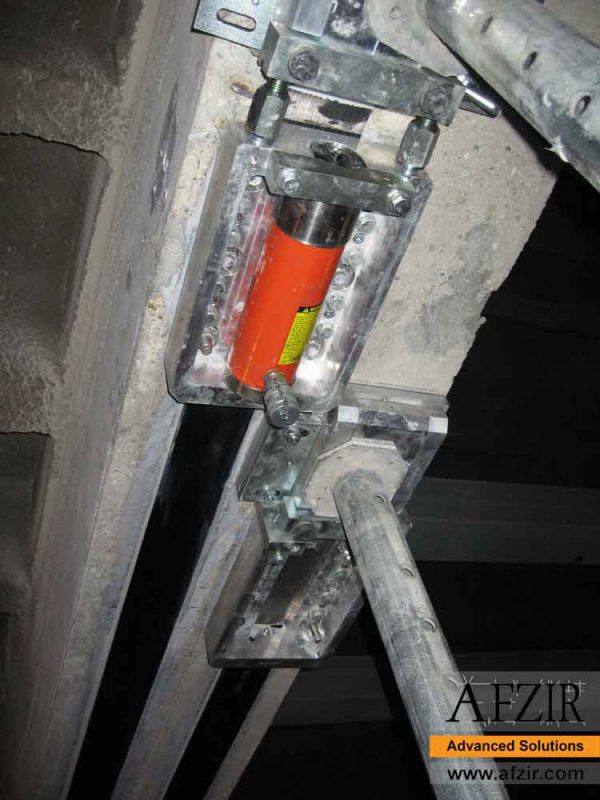 The use of externally post-tensioned (EPT) steel tendons has been a recurrent choice in the structural rehabilitation of timber, concrete and steel bridges over the past 50 years. The method is well suited for the strengthening and repair of flexural members, especially when performance under service conditions needs to be improved (e.g., relieving tensile overstress with respect to service loads in both positive and negative moment regions, decreasing the magnitude of fatigue stress, and controlling deflection by recovering excessive short-term deformations and reducing the effect of sustained loads on long-term deformations). In concrete structures, superimposing compressive forces in tension areas enables the reduction of the width of existing cracks, thereby mitigating the effects of corrosion of the internal reinforcement, and possibly decreasing the amplitude of vibrations induced by live loads. These issues are faced rather frequently by bridge engineers. Considerable potential also exists to enhance the shear and torsional strength by means of EPT reinforcement, with concrete box girders being the ideal test bed for such applications. The cost-effectiveness of external post-tensioning is enhanced by the ability to perform field installation with minimal or no service disruption. In addition, the design of straight threaded rod or profiled wire strand strategies can be tailored depending on specific needs and cost-benefit considerations. In the latter case, prefabricated saddles or deviators are arranged to provide the desired uplift forces at intermediate
locations between the end anchors, thereby combining the optimal use of high-strength steel with more efficient force systems, while adding negligible dead load.The post-tensioning (PT) forces are typically imparted using hydraulic jacks at the live ends. The technology has been successfully implemented in the building arena, as the need for structural upgrade has arisen due to aging, deterioration from exposure to aggressive environments (e.g., in the case of parking garages and structures in proximity of salt water), or due to changes in use demanding higher design loads, more stringent serviceability requirements, or correction of design and construction errors. Recently, alternative solutions have been developed and validated that use EPT carbon fiber reinforced polymer (CFRP) reinforcement in both new construction and rehabilitation. CFRP materials are ideally suited for both pre- and post-tensioned elements, in the form of bars, plates, and strands, due to their high tensile strength (typically in excess of 1800 MPa), small relaxation (typically below 3% of the initially applied stress), and corrosion resistance. In new construction, the use of EPTCFRP elements may provide improved constructability and durability performance compared to that of internally grouted tendons, which is often of concern. Magnetic transparency and nonconductivity are also peculiarities that may be valuable in specific applications when fibers other than carbon are used. The reduced weight of CFRP tendons of about 1.5 g/cm3 represents an additional benefit, especially when installed on structural members with relatively long spans. The challenge in the use of CFRP tendons is in the development of anchor systems that allow the exploitation of the full material strength in tension. In fact, transverse mechanical properties of CFRP are resin dominated and are typically two orders of magnitude smaller than those in the direction of the fibers. To date, few external post-tensioning systems have been developed for structural rehabilitation. Limited field applications are reported that consist of straight near-surface bonded or unbonded CFRP plates with relatively sophisticated anchorage systems mounted either on the slab or girder soffit or sides, using hydraulic jacks to apply the PT forces. Unbonded EPT CFRP bars were previously used in an early demonstration project on a three-span continuous steel I-girder bridge with load ratings that may have required posting. The system comprised CFRP bars with diameter of 9.5 mm, running parallel to the top side of the bottom flange of the I-girder upgraded, which were connected to end anchors made of steel stiffened angles by means of steel-tube anchors and couplers. Portable hydraulic jacks were used to post-tension the rods.

The base configuration of EPT system is consists of a set of two pultruded CFRP bar assemblies, each with a dead- and a live-end forged stainless steel anchor and an intermediate deviator. Each bar,
with nominal diameter db = 12.7 mm (other diameters can be used), is equipped at either end with stainless steel swage couplers, which were engineered to allow the bars to develop the CFRP ultimate strength. At the dead end, the bar assembly terminates with a steel thread adapter and a threaded steel rod with a clevis end-fitting that connects to the steel T-shaped anchor by means of a HEX steel bolt, thereby allowing free end rotation. The arrangement of the live end features a hybrid turnbuckle that is mounted between a threaded steel rod from the HEX thread adapter connected to the bar assembly, and a threaded rod with a clevis end-fitting that connects to the forged T-anchor similar to the dead end. The anchor fixtures can be secured to concrete surfaces using adhesive bonded high-strength steel threaded rods, where the structural adhesive should be selected among those suitable for overhead applications under circumstances as in Fig. 2, which depicts a trial installation onto the soffit of a reinforced concrete slab. Mechanical connections with high-strength steel bolts can be used on metallic structural members. The PT force can be applied by operating each turnbuckle at the live end with a wrench, while using another wrench to block rotation of the rod assembly at the HEX thread adapter. A long-arm wrench may be convenient to facilitate the operation when feasible. The present configuration replicates that typical of straight near-surface CFRP tendons [21–24], and provides a comparable structural performance for the same amount of reinforcement material used without the need of any specialized equipment and time-consuming operations. In addition, the use of intermediate deviators enable to achieve profiled bar configurations commonly adopted with steel wire strands, such as the classical ‘‘king-post’’, to fine-tune the forces imparted to the structure.

Post-tensioning is the introduction of external forces to the structural member using high strength cables, strands or bars. The PT reinforcement is connected to the existing member at anchor points, typically located at the ends of the member, and profiled along the span at strategically located high and low points.  When stressed, the tendons will produce upward forces (at low points) or downward forces (at high points) to create reverse loading on the member.

PT strengthening systems can be classified into two categories, External and Internal.  External PT involves exposed cables or steel bars that are anchored directly to the structure.  Because the reinforcement is located outside the member, its use can be limited by fire rating and durability requirements.  To improve durability, systems consisting of sheathed cables and coated anchors can be used.  Alternately, the external cables can be placed inside plastic ducts and then filled with cementitious grout.

An internal PT system, on the other hand, consists of PT reinforcement that is placed inside the original member. It can be achieved by placing the new PT reinforcement in cores made along the axis of the member, trenches chipped along the span of the member, or by placing the reinforcement in a new concrete enlargement bonded to the existing member. The latter is typically more effective where a relatively large increase in strength and/or stiffness is required. An internal PT system can also address all fire rating and durability concerns.  The following sections will discuss the design consideration of PT strengthening system placed in a new concrete jacket.

Post-tensioning forces introduced via an EPT system affect the short-term and, to a different extent depending on the time of installation and the loads to be carried, the long-term deflections. A profiled bar configuration is intuitively more effective in recovering vertical deflections by actively counteracting the self-weight and the superimposed permanent and live loads. In this section, the structural implications of relevant parameters that define geometry, flexural stiffness, and degree of end constraint or continuity of a single-span, one-way member to be upgraded are analyzed and discussed, along with the EPT system layout for basic straight and profiled tendon schemes. 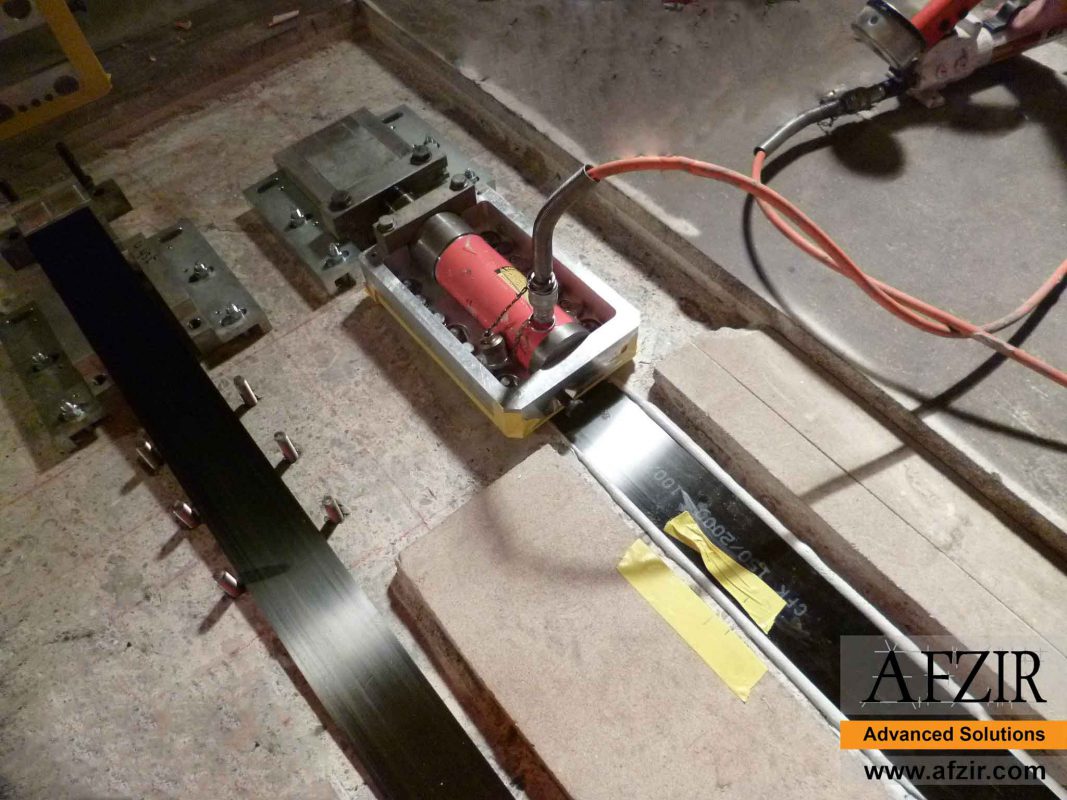 Anchor types can be divided into three groups: wedge, resin/grout potted, and spike systems. The wedge systems can be further subdivided into: direct contact (plastic and steel wedges) and systems utilizing a sleeve. The potted anchors group varies depending on the internal configuration of the socket: straight, linearly tapered, and parabolically tapered sockets. Only one spike anchor was considered. The following observations are made for the three anchor groups:

● Wedge Anchors: Grit should be present on the wedge surfaces to ensure proper gripping of the tendons. This observation is drawn from comparisons between the Carbon Stress and Arapree tendons, both of which utilize plastic wedges. The Carbon Stress system with applied grit did not show the slippage exhibited by the untreated Arapree wedges. Steel wedges induce some local damage to the tendon even though there was no indication of loss of efficiency. Systems with a dry-lubricated outer wedge surface are easier to take apart than other systems, though both required use of force to free the wedges.

● Resin/Grout Potted Anchors: Potted anchors often fail through pullout of the tendon from the resin/grout anchor without rupture of the tendon. The parabolic system showed splitting and cracking of the resin plugs. The potted anchors are the easiest to setup for testing when they are pre-installed. The practical drawbacks include precutting the tendons to length and the curing time for the resin/grout.

● Spike Anchors: The spike anchors used with the dry fiber ropes work relatively well. This system requires field setup time, which resulted from the combination of removal of the plastic sheat, combing and spreading of the individual fibers and proper placement of the spike with a uniform distribution of fibers all around it. 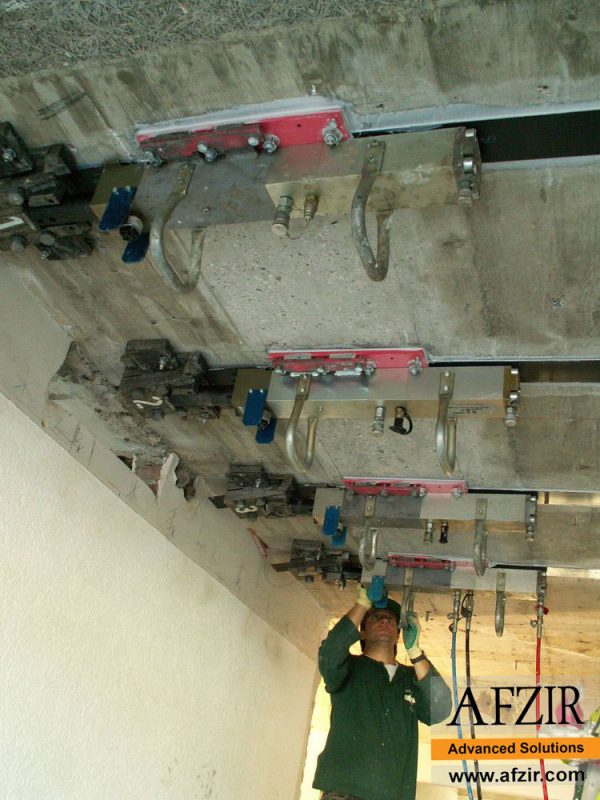 Strengthening of existing structures involves one of the more complex design and construction processes. Strengthening work is typically more challenging than new construction work due to complex logistics and the extensive coordination required to deal with occupied, and sometimes fully functional structures.  External post-tensioning systems provide many benefits including improved strength, improved service performance, and improved durability due to precompression of the concrete encasement.